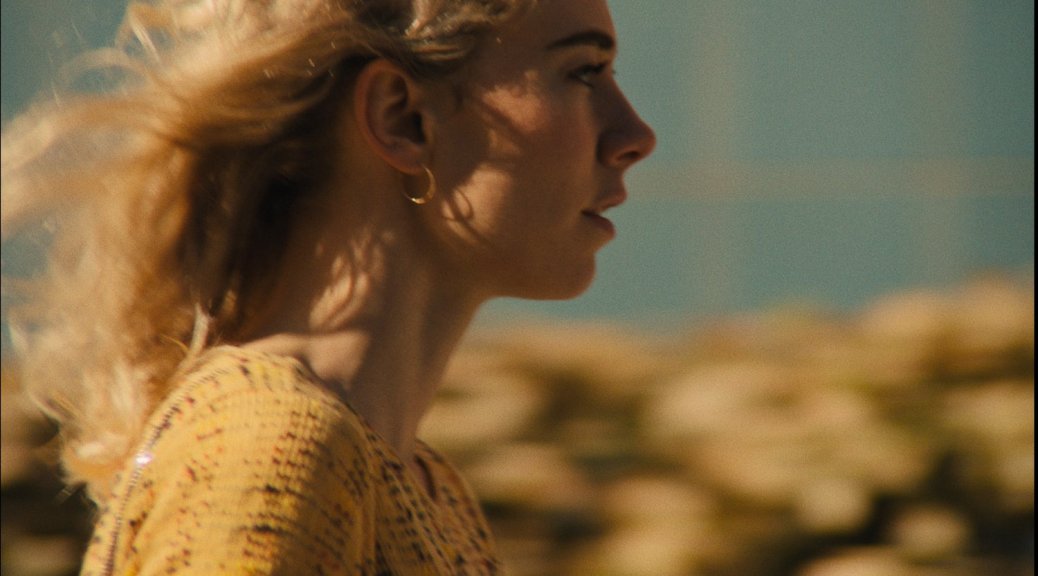 Nobody wears a mask at any point during Italian Studies, and nobody makes a mention of social distancing, much less COVID-19. But the film, written and directed by Adam Leon, feels as much about the pandemic as any film thus far that’s explicitly been about the pandemic. Of course, this is entirely a coincidence, as the film was shot before the pandemic and held on the shelf until its premiere at the Tribeca Film Festival in 2021.

The film relates to the current state of the world in its sense of isolation, though its protagonist finds herself very pointedly wandering the streets of New York City amongst a crowded sea of people. That protagonist is Vanessa Kirby, who rightfully received an Oscar nomination last year for her devastating work in Pieces of a Woman (and, in this writer’s opinion, deserved to win). Her performance is more subtle this time around, though no less impressive. Leon drops us into the middle of Kirby’s predicament without any context, though it’s clear early on that something isn’t right. Kirby plays a young woman, aimlessly walking the streets of the city, simply trying to remember who she is or where she’s trying to go. An early scene effectively sets the stakes, as she ties up her dog outside a small hardware store: she browses for a few minutes without buying anything, picking up random items and hoping they’ll spark some sort of sense memory, and walks away, leaving her dog behind.

We eventually learn that Kirby is Alina Reynolds, an author of a recently published series of short stories – from which the film gets its name – but we’re never sure if that information is completely trustworthy. She largely gleans information from the interactions she has with those around her, believing it will be the basis for her next book and building her own character. By chance, she runs into a similarly aimless young man named Simon (Simon Brickner) and tags along with him. Their relationship initiates mostly out of convenience, as Simon simply provides an anchor to the real world for Alina, but it ebbs and flows through different permutations throughout the course of the film.

Leon directs the film with a dream-like quality, usually filming from afar and letting events unfold naturally. Most conversations have an improvised cadence to them, largely due to Leon’s use of non-professional actors. Though most of Kirby’s early scenes are without dialogue, she effectively conveys Alina’s headspace through her distant gaze and body language. It’s like she’s waltzing through a fog of her own memories. Other actors perhaps would have instinctually overplayed Alina’s predicament, but Kirby sells Alina’s trauma without playing to the cheap seats.

Interspersed throughout the film are various “interview” segments between Alina and the teenagers she comes across. It’s here where Leon’s intent is less clear; their responses are refreshingly honest, but they don’t add much to the overall themes of the film. But it makes sense why Alina would gravitate towards the younger generation, as she feels less out-of-place in the world, unsure of where she’s going next.

It’s easy to compare Italian Studies to Under the Skin, Jonathan Glazer’s 2014 film about an alien who literally consumes people as she tries to understand them. It’s also not a gender-swapped take on Memento, as someone tries to build back the pieces of their forgotten life. This is a more grounded film and, therefore, a slightly less memorable experiment. That it ends in more of a shrug than a pronounced statement doesn’t exactly help its case overall.

Still, Leon and Kirby work well in tandem together. He doesn’t seem particularly interested in how Alina arrived at her current predicament, nor does he seem to care how she’ll solve it. The non-linear structure, along with Nicholas Britell’s haunting score, add to the disorienting nature, putting us squarely in Alina’s mind. January is typically where movies go to die, as studios dump them when they don’t believe they’ll be commercially or critically viable. Whether Italian Studies is successful or not, it provides a unique perspective from an emerging filmmaker, and another magnetic performance from one of Hollywood’s emerging stars.