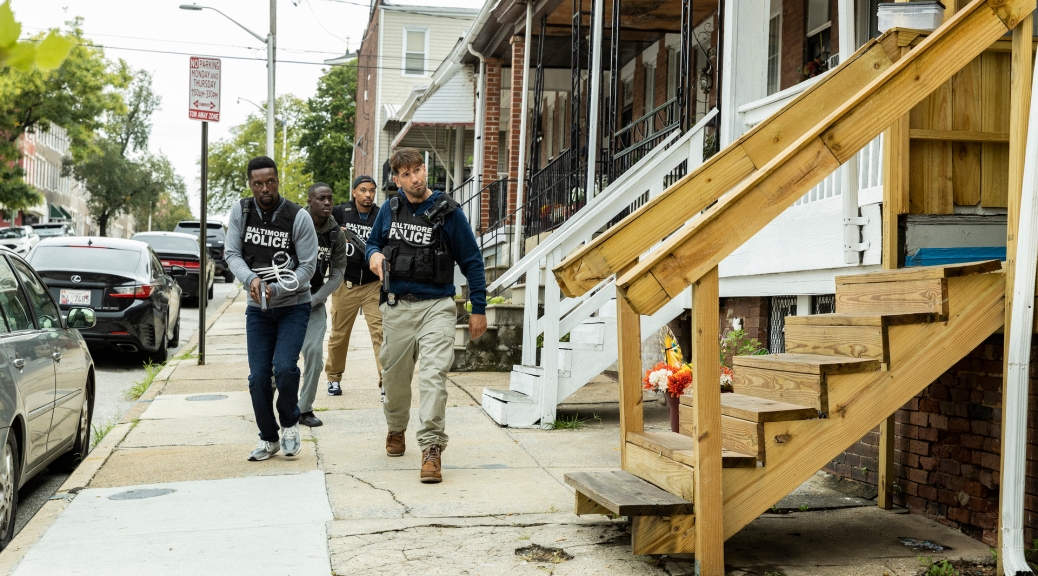 We Own This City

“We own this city” is often a familiar rallying cry in rap songs, used to highlight the downtrodden, the forgotten, and the rejects of the rapper’s home town. But, in the hands of David Simon and George Pelecanos, the phrase “we own this city” becomes something of an ominous threat. Simon, the maestro of The Wire, often cited as one of the greatest TV shows ever made, imbues We Own This City with a lot of similarities of the landmark series, but updates it to reflect Baltimore’s ever-changing landscape.

Freddie Gray died at the hands of police in April of 2015, a watershed moment not only for America and the way we perceive policing, but for the city of Baltimore and its rocky relationship between its citizens – specifically its Black citizens – and the police force. Adapted from Justin Fenton’s novel of the same name, We Own This City explores the fallout that Gray’s death had and the changes, or lack thereof, that came to BPD at every level. In fact, one could make a dangerous drinking game out of the number of times Gray’s name is invoked throughout the mini-series’ six episodes. The series jumps back and forth largely between 2015 and 2017, and focuses on the Gun Trace Task Force, a unit headed by Sgt. Wayne Jenkins (Jon Bernthal), and the federal inquiry into his group’s misconduct. Jenkins opens the series with a rambling monologue about the differences between the right and wrong times to mercilessly beat a suspect, superimposed over a montage of mostly Black men being cuffed and led away.

Bernthal has always been a reliable character actor and supporting player, but here his role is expanded, and he runs away with the show. Bernthal is undoubtedly the biggest name amongst the expansive cast – at least for those of us who haven’t committed The Wire’s cast list to memory, as Simon has brought back a great number of those players here – and he’s in total command whenever he’s on screen. Bernthal portrays Jenkins as the alpha cop of every Blue Lives Matter believers’ wet dream, doing as he pleases without fear of consequence, all in the name of earning the respect of his fellow police. He’s the kind of cop who raids a place or stops a car on a whim, regardless of evidence or lack thereof, and hopes for the best. I hesitate to call this Bernthal’s greatest performance, if only because he has so many comparatively great ones.

But Jenkins is just one cog in the machine on display in We Own This City. It should come as no surprise to fans of Simon’s work that he dedicates the show to exploring every angle of the Baltimore police environment and the minutiae of their processes. In fact, one of the show’s minor failings is in how it incorporates Jenkins’ arc in the early goings, randomly cutting to different points throughout his career and framing it around different complaints about him. Characters come and go throughout the series, simply serving as a way in to the story. This isn’t a fully-formed portrait; it’s a fractured collection of pieces that fit a city-wide frame.

Our audience proxy is Nicole Steele (Wunmi Mosaku), an attorney that joins the Civil Rights division of the Department of Justice, as she discovers just how many bad eggs have permeated the city’s culture. Baltimore’s policy, as it likely was in many other major American cities at the time, was to ignore as many red flags as possible, so long as guns and drugs and violent offenders were taken off the street. Running concurrently to Steele’s storyline is the federal probe into the Task Force’s wrongdoings, headed by Erika Jensen (Dagmara Dominczyk) and Leo Wise (Lucas Van Engen).

Each episode of We Own This City is directed by Reinaldo Marcus Green (who most recently directed King Richard). It’s to Green’s credit that the series is able to juggle so many characters and storylines as they converge on each other, and that six hour-long episodes – with few action set pieces to speak of – can feel so engaging. Too many mini series lately are full of too many episodes with runtimes that are too long, but We Own This City hums right along, rarely feeling like it’s using up its artistic license by drawing out dramatic threads or utilizing unrealistic character beats. Yes, the specter of the Trump candidacy/presidency looms in the background of the later storylines, but Simon and Pelecanos never beats us over the head with this.

I imagine this theme of moral rot at every corner of the system is what initially drew Simon and Pelecanos to adapt Fenton’s book, as The Wire made its bones on looking at the crime problem from a myriad of perspectives. Critically missing from We Own This City are the subplots coming from those opposing the police that was so prevalent in The Wire, a la Omar or Marlo Stanfield (though Jamie Hector, who played Stanfield, appears here as a homicide detective). Though doing so would surely invite too many comparisons to The Wire, as if there weren’t enough already, and would make it more difficult for this series to stand out. Regardless, We Own This City is an engrossing, enlightening look at an impossible situation, which we’re still dealing with and likely will be for years to come.

The first episode of We Own This City will premiere on HBO on April 25 with subsequent episodes released weekly.

2 thoughts on “We Own This City – Limited Series Review”