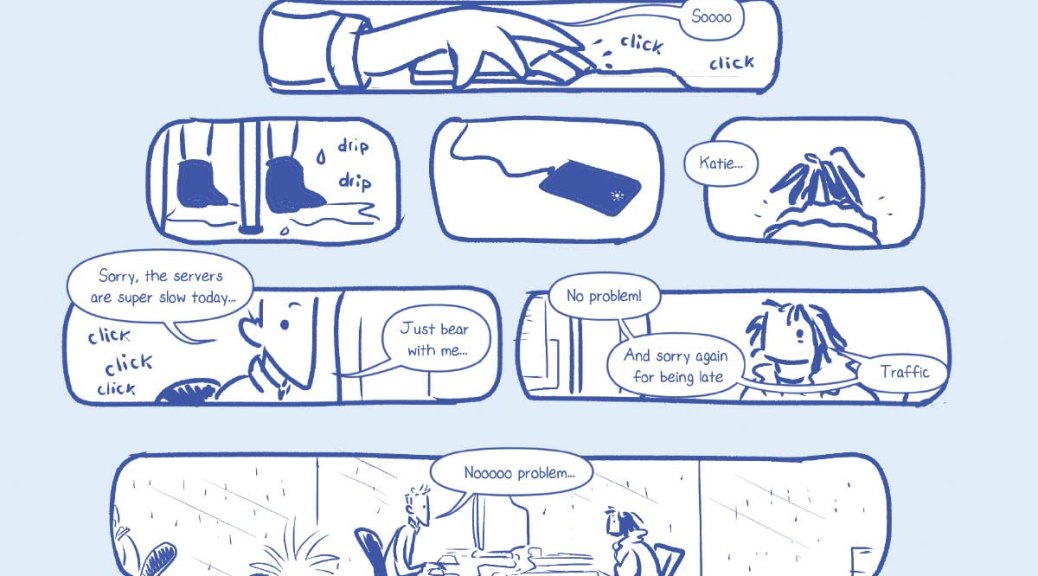 Do you often experience feelings of anxiety or depression? Do you worry about the future? Do you feel like you’re not doing enough on a day-to-day basis? Does it feel like your life isn’t heading in the right direction? Do you spend too much time staring at a screen? Emily McGovern is acutely aware throughout Twelve Percent Dread that we’re asked some version of these questions in our social media feeds, podcast ads, TV and radio commercials, billboards, and everywhere in-between throughout our daily lives, and it forms the backbone of her new graphic novel.

McGovern’s debut graphic novel, 2019’s Bloodlust & Bonnets, effectively announced her as a unique comedic voice in the depressingly small sub-group of female comics artists. With Twelve Percent Dread, she continues to hone that voice, and the result is another gem full of laughs and insights into the current hellscape that is our modern world. Centered around the tech industry and all its problematic figures, the book also doubles as a kind of autobiography for McGovern, who spent some of her post-college years tirelessly searching for what to make of the rest of her life – again, something a large swath of people can relate to.

McGovern’s stand-in of sorts here is Katie, a down-on-her-luck twentysomething who shares a room with Nasim, a non-binary, undocumented immigrant. They fake a relationship until Nasim’s visa application is approved, but struggle to pay rent and bus fare – there’s even a running gag about their fridge magically running out of milk. Katie frequents a temp agency, where she finally lands a plum nannying gig, babysitting for the daughter of Michelle, a Steve Jobs-esque CEO of a tech company named Arko.

The other half of the book sticks with Michelle and her underling Emma, who also happens to be Katie’s best friend. Naturally, Michelle is a self-righteous narcissist, and McGovern mines a good deal of humor out of her misguided beliefs, but it’s nothing you haven’t already seen in Silicon Valley. Rather, the best humor comes from McGovern’s sharp observations about people – like how every Brit over the age of 60 eventually believes they actually served in World War II. Whereas Bloodlust & Bonnets slyly updated its Jane Austen influences to suit the modern world by leaning into its bonkers elements, Twelve Percent Dread forgoes McGovern’s more fantastical tendencies to utilize more character-based humor. Though the book isn’t entirely grounded in reality, as evidenced by the reveal of the origins of Arko’s newest employee, or a recurring reference to a low-budget dental procedure.

Another departure from Bloodlust’s style is in its artwork. Pages are broken down into slivers, rather than square or rectangular panels, which allows readers to consume all 420 pages at a rapid clip. And it’s drained off all color, with everything sketched in loose navy blue pen lines. This can sometimes lead to a brief bit of confusion when the story zips from one storyline to the next, but each of the characters has such a unique voice that it’s easy to get your bearings. McGovern’s unique character designs remain consistent though; rarely do human faces receive more detail than two dots and an eyebrow. That she can still convey their emotions effectively through their sweeping body movements or posture is a testament to the artist’s confidence.

The book’s title refers to a wellness app that Katie uses to try to improve her mental and physical health, a kind of surface-level assessment of a person’s place in life. This storyline is smartly paralleled with Arko’s unflinching march toward market dominance, regardless of how its customers feel about the company’s direction. Despite the book’s breakneck pacing, some of its best moments are when it slows down and focuses on Katie and Skylar, Michelle’s daughter, as the two bond over the uncertainties of growing up. I don’t presume to know whether McGovern’s future work will skew towards the silly as in her first book, or whether she’ll stick to more relatable stories, but Twelve Percent Dread shows that she’ll tackle whatever it is with a level of humor and heart that isn’t seen often enough in today’s comics.

Twelve Percent Dread is available now at bookstores and online wherever books are sold.