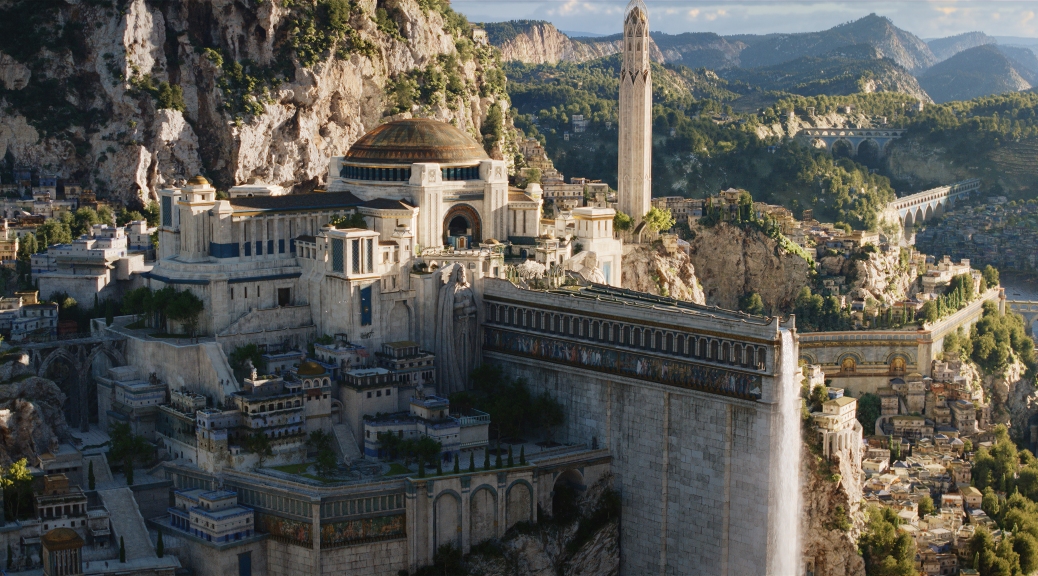 Warning: Reviews of The Lord of the Rings: The Rings of Power season 1 will contain spoilers.

Three episodes into The Rings of Power, and I already wonder whether casual fans will be left in the cold by the massive amount of information to take in from Tolkien’s source material. But if you can watch Galadriel and Halbrand’s portion of Adar without your brain going into a haze, you’re most likely going to remain on board for the remainder of the season. I don’t say that because the Númenór storyline doesn’t work – on the contrary, I think it’s the best part of the episode – but because it’s so loaded with complicated backstory that took place hundreds of years before what we’re seeing today. It’s something that George RR Martin perfected with the Game of Thrones books: how much of the history of Middle-earth should we pay attention to, and how much should we filter out? Luckily for me, there’s a small piece of my brain that still remembers much of it from my nerdy youth.

Númenór is a place that was only casually mentioned throughout the films but never seen, and it’s where Galadriel and Halbrand spend much of Adar after being rescued at sea by Elendil (Lloyd Owen) at the end of the last episode. Much of the conflict actually comes between Elendil and Míriel (Cynthia Addai-Robinson), the Queen Regent of Númenór, because he brought Galadriel to the city, where elves are far from welcome. Which is fine with Galadriel because she is mostly concerned with escaping as quickly as possible. That is, until Elendil clues her in on the city’s records room, a wonderfully detailed piece of set design that adds another layer to the show’s impeccable crafts. It’s easy to complain that the show is moving at a slow pace when it comes to advancing its story on the war against Sauron, but the showrunners continue to explore the long-standing rivalry/feud between men and elves – a key theme throughout Tolkien’s texts.

Meanwhile on Númenór, we get a surprising amount of backstory on Elendil, and his son Isildur’s (Maxim Baldry) relationship. This is another moment in the show that will likely delight the diehard fans of Tolkien and threatens to go over the heads of casual viewers of the show. A perfunctory Wikipedia search reveals the immense importance of Isildur for the future of Middle-earth, but for now it just feels like yet another character in this ever-expanding cast to keep track of.

Adar is completely divorced from Elrond and his quest with the dwarves/Celebrimbor, but we do spend time with Arondir after last week’s cliffhanger. There isn’t much to thematically unpack here, as Arondir finds himself enslaved by the orcs that serve Suaron as they build the underground tunnels that they utilized to destroy the human village off-screen last week. Arondir, along with his fellow captors, realizes the orcs cannot be exposed to sunlight, and devises a plan to escape. The action in the escape sequence is unsurprisingly well done, if a little short-lived. Legolas, and many of the elves, received the lion’s share of bad-ass action moments in the film trilogies, and it’s good to see it revisited here, as Arondir gets some expertly choreographed fight moments and kills.

Unfortunately Adar, and the show, continues to stall for me with the Harfoot’s journey. Three installments into Rings of Power and it’s still hard to understand Nori or the Harfoot tribe’s place in the world, or why the showrunners deemed them worthy of so much screen time. The Hobbits in The Lord of the Rings and The Hobbit represented the purity that was still inexplicably present in an impure Middle-earth, but there seems to be a longer, larger mythology to the Harfoots that’s difficult to ascertain. It’s an interesting contrast between the sedentary lifestyles of the Hobbits of the shire and the nomadic lifestyle of the Harfoots. Perhaps the ultimate goal that Payne and McKay have in mind is that the Harfoots find the Shire and learn to settle there. Someone makes an off-handed reference to “the grove” in this episode, and the Stranger (Daniel Wayman) only shows his face near the end, so I remain unenthusiastic on this storyline’s prospects for future episodes. At least the show got it over with already and revealed the Stranger to the rest of the tribe. Now if only they could provide some interesting conflict, or continue to delve into the mysteries of the Stranger and who he is.

Despite my Harfoot-based misgivings, I remain excited to watch and discuss The Rings of Power. The show is padded out with rich characters and top-notch production elements (the Harfoot costumes may very well be my favorite so far). I will never have the time or patience or desire to re-read The Silmarillion but Rings of Power feels like a great companion piece for those that love Tolkien’s world and want to explore the characters that laid the groundwork for his most famous works.

Episodes of The Lord of the Rings: The Rings of Power will be released on Amazon Prime Video each Friday