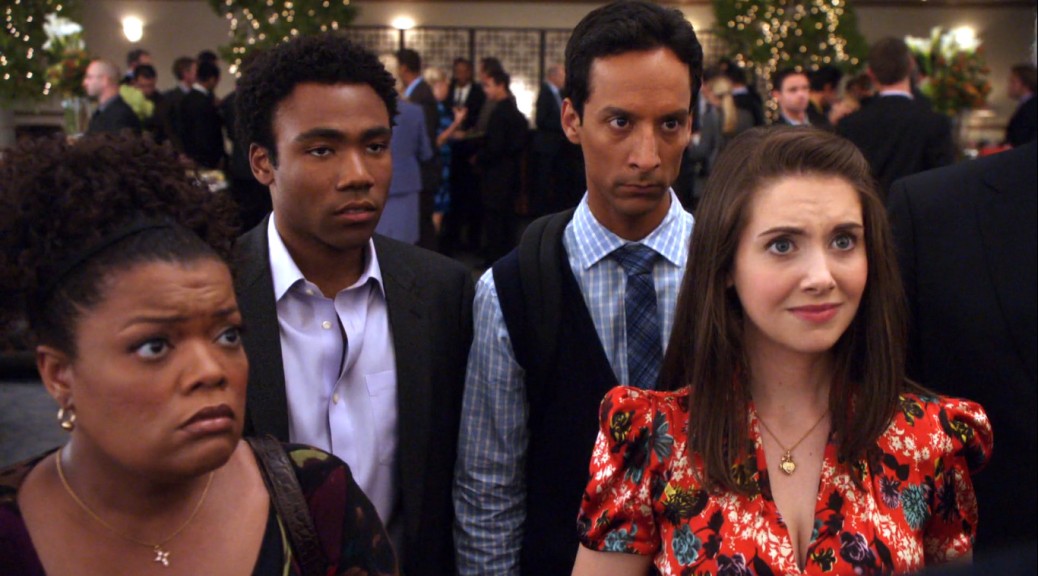 In my mind, Community is a show that has had a lasting footprint across the pop culture landscape, and feels a bit like an afterthought at the same time. The show essentially launched the careers of many big names still working steadily today, both in front and behind the camera. And yet, I don’t know how many people outside of my age group point to the show as one of the sterling examples of the Golden Age of TV that kicked off in the late 2000’s. So this season should prove to be an interesting experiment to determine where I land on the show’s lasting legacy. After the success of the back half of season one of the show, Dan Harmon had the wind at his back with season two, in spite of the show’s poor performance in ratings and the general lack of support from the NBC brass.

From what I remember when it originally aired (I haven’t watched an episode since it ended, which is part of why I chose the show to cover), the meta elements played a large part into what connected with so many people. Here was a show that somehow found a way to pay homage to the TV and movie conventions it loved so much and poked fun at simultaneously. Not to mention it was the only show on TV that even attempted to do outlandish concepts for episodes, like the stop-motion Abed’s Uncontrollable Christmas, or Remedial Chaos Theory. But Harmon always managed to ground its silliness in the characters that he had crafted so lovingly.

Which is why it’s almost jarring to see Anthropology 101 and Accounting for Lawyers as some of the more grounded episodes of the show. Any season premiere of a show has to deal with the fallout of the previous season’s finale and set the stakes for the season ahead, and that’s mostly what’s going on in Anthropology 101. After Britta (Gillian Jacobs) declared her love for Jeff (Joel McHale), and Jeff and Annie’s (Allison Brie) subsequent kiss at the end of last season, Jeff has become a campus pariah, the jerkwad man who couldn’t reciprocate his feelings for her. But he twists it back on Britta by declaring his love for her, and they become caught in a game of chicken where neither one can back down, for fear of being blackballed by Greendale at-large. Stuck in the middle is Annie, who still has feelings for Jeff and is essentially rendered invisible as Jeff’s only fueled by his own self-interest. The culmination of Anthropology 101 is classic Community, as Jeff brings everyone back together with a heartwarming speech about respect, a sitcom mainstay if there ever was one, but episode writer Chris McKenna knows that this group of weirdos loves each other at the end of the day.

Chang (Ken Jeong) was always a big sticking point for fans of the show; there were plenty that hated him and his continued involvement, and there were those that loved him. Consider me more in line with the latter camp, though this rewatch has already made me realize that his detractors weren’t entirely wrong. It’s clear that Harmon & Co. wanted Chang around for future installments after he wasn’t really needed after the first season. I think his arc fits in line with the show’s mission statement rather well, in that a group of strangers comes together to find a safe space where they can find solace in each other. That’s essentially what Chang wants as well, he just has stranger methods.

Jeff’s lawyer past is almost always an aspect of his character that I forget about when reflecting on the show, and I had certainly forgotten how much the show had played into it in the early goings. If Accounting for Lawyers does anything that plays into the show’s overall thesis, it’s in the group’s continued commitment towards each other. Jeff reconnects with his buddy Alan (Rob Corddry), who the group suspects was responsible for getting Jeff disbarred. There’s some fun heist elements to the second half of the episode with Annie, Abed (Danny Pudi), and Troy (Donald Glover), but the rest feels relatively slight, given what the show is capable of being.

We get early glimpses of the show fully embracing its weirdness in both Anthropology 101 and Accounting for Lawyers, especially with Dean Pelton’s (Jim Rash) Pop ‘n’ Lock-athon, but these are both solid examples of the show doing what it did best: displaying adult friendships in a heightened reality. Everyone gets a chance to contribute something, whether it’s Troy’s excellent line reading of “did you know Go-Gurt is just yogurt?” or Annie’s jilted innocence (though Dan Harmon’s looming contempt for Chevy Chase is already a little evident). I don’t think anyone would point to either of these episodes first as perfect examples of what Community is, but they display a level of confidence that would later prove why it’s so beloved.

Accounting for Lawyers Grade: B+